Aims of study: ‘7T-DLB’ uses the ultra-high resolution (7T) MRI scanner at the Wolfson Brain Imaging Centre (WBIC, University of Cambridge) to investigate Dementia with Lewy Bodies (DLB) and Parkinson’s Disease Dementia (PDD) in more detail than previously possible. We are set to scan 30 volunteers with these conditions, and will also be scanning 30 volunteers with Alzheimer’s disease (AD) and 30 older adults without cognitive problems. We will be obtaining very high resolution images of brain structure, susceptibility weighted images (which are sensitive to iron), and using MR spectroscopy to quantify changes in the neurotransmitters GABA and glutamate (which are linked to alertness and hallucinations). In comparing our findings with cognitive testing and the symptoms described by our study participants we hope to gain a greater understanding of how DLB and PDD develop in the brain, how DLB and PDD differ from AD and healthy aging, and how brain changes produce the symptoms specific to this type of dementia. Ultimately, a greater understanding of these forms of dementia may lead to new insights; informing the search for novel diagnostic tests and treatment targets. 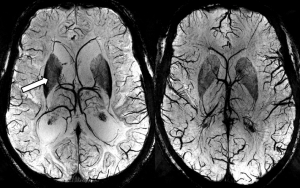