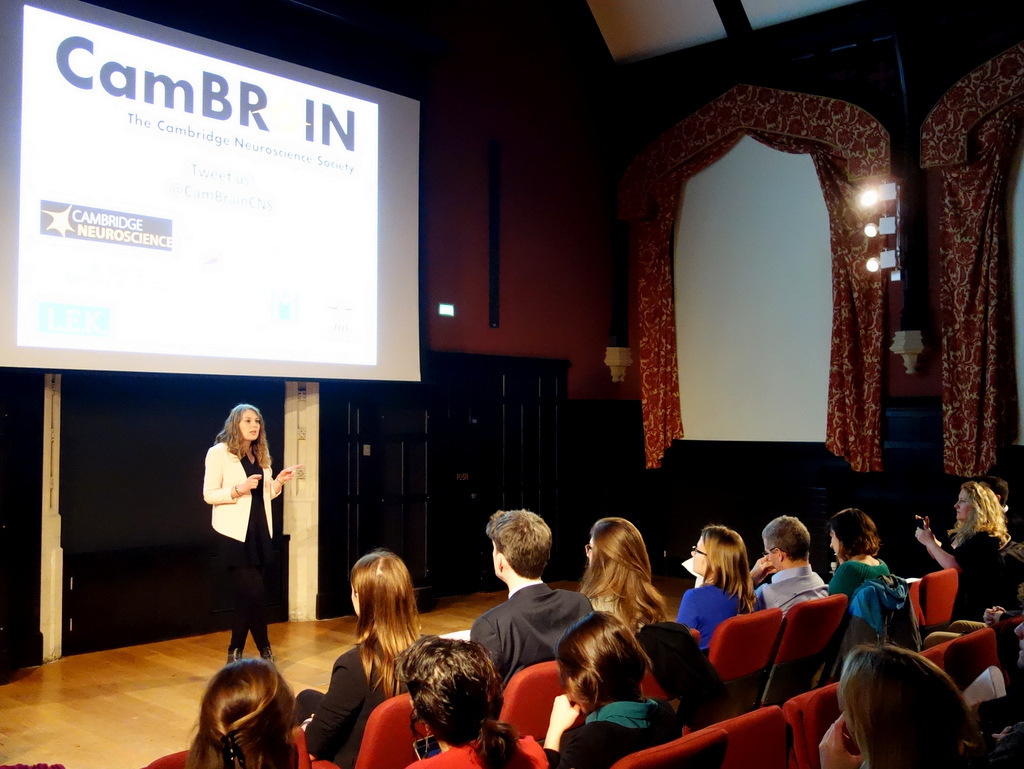 After getting a degree in neuroscience, there are many exciting career options available to you. Some people choose to stay in academia, while others may want to explore jobs in industry, science communication, or policy. A science degree is highly valued in a variety of sectors and companies, which can be easily forgotten by graduates. Therefore, CamBRAIN – The Cambridge Neuroscience Society organised a careers event on Monday 25th April. They invited professionals from a wide range of companies to speak about their current employer, role, and career progression.

The first speaker was Dr Deniz Vatansever, who recently started a post-doc at the University of York after completing his PhD at the University of Cambridge. While at Cambridge, he was involved in founding CamBRAIN and served as the first president of the society. He spoke about many unsuccessful applications during his career and stressed the importance of being persistent – he got where he is by “a combination of luck and hard work”.

Next was Connie Orbach, who is a radio producer at The Naked Scientists. After her degree in neuroscience, she completed an MSc in science communication at Imperial College London. She told the audience: “My job is the opposite of doing a PhD – it’s very wide and shallow knowledge”, which she enjoys very much. While there is not much money in science communication – “Not everybody can be a Brian Cox!” – Ms Orbach discussed how she finds her role as a science communicator both exciting and rewarding.

She was followed by Dr Carla Cox, who works as a research knowledge manager for the charity Alzheimer’s Research UK. Her day involves program management and organising meetings to discuss current projects. She also keeps track of the investments and grants awarded by Alzheimer’s Research UK using sophisticated spreadsheets, which earned her the nickname “Queen of Spreadsheets”. Using Excel is a skill she developed during her PhD at the University of Bath and her post-doc at King’s College London. 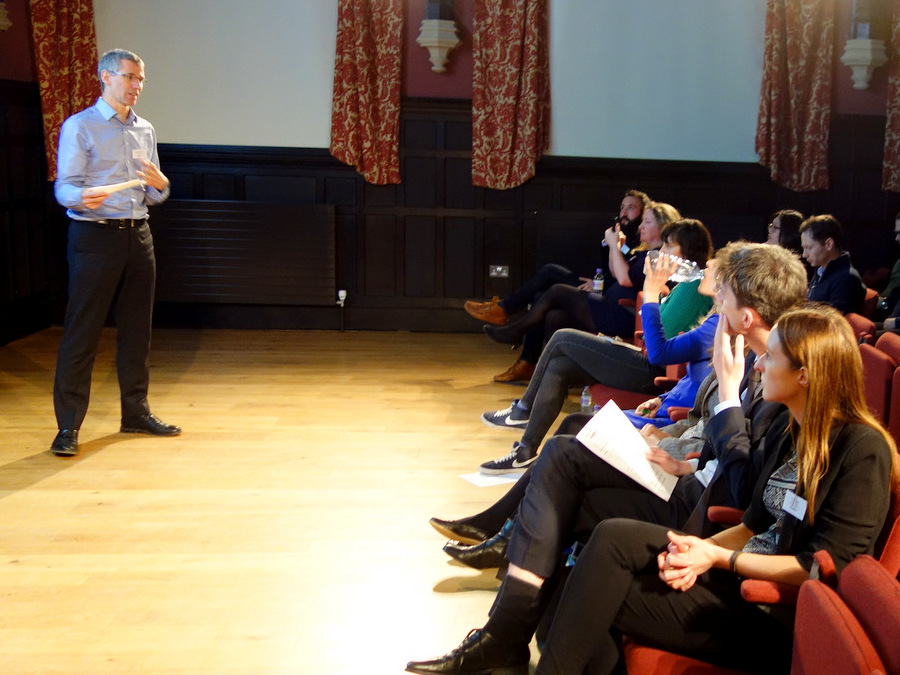 Dr Damian Crowther was the next speaker of the evening. After a successful research career as a group leader at the Department of Genetics, University of Cambridge, he wanted a change of pace and responsibilities. He moved to the biotechnology company MedImmune as director of research and development. After being known as the “Fly Guy” in his old lab, he now works on various neuroscience projects from the early stages of conception all the way to clinical trials.

Next was Dr Kiri Granger, a scientist at the software company Cambridge Cognition. This company was started as a University spin-off, after Professor Trevor Robbins and Professor Barbara Sahakian co-invented a testing battery for cognitive assessment. Dr Granger came across Cambridge Cognition at a scientific conference and she urged the audience to “go to conferences by yourself and reach out to people”. Her current role involves advising pharmaceutical companies on using cognitive tests in their clinical trials, writing analysis plans, and study reports.

The management consultant company L.E.K. was introduced next. Dr Sevil Sofueva and Dr Alastair Hamilton told the audience about their roles as L.E.K. associates. Both completed their DPhils at the University of Oxford and now work on cases from the life sciences sector. They develop strategies, help with mergers, and improve performance of their clients. Both felt that their academic careers gave them valuable skills. Dr Hamilton said: “My PhD gave me skills directly transferable to consulting: critical thinking, creativity, and independence”. About her reason for moving away from academia, Dr Sofueva said: “in research, too much is about luck – I wanted a more dynamic role that allowed me to interact with people”. 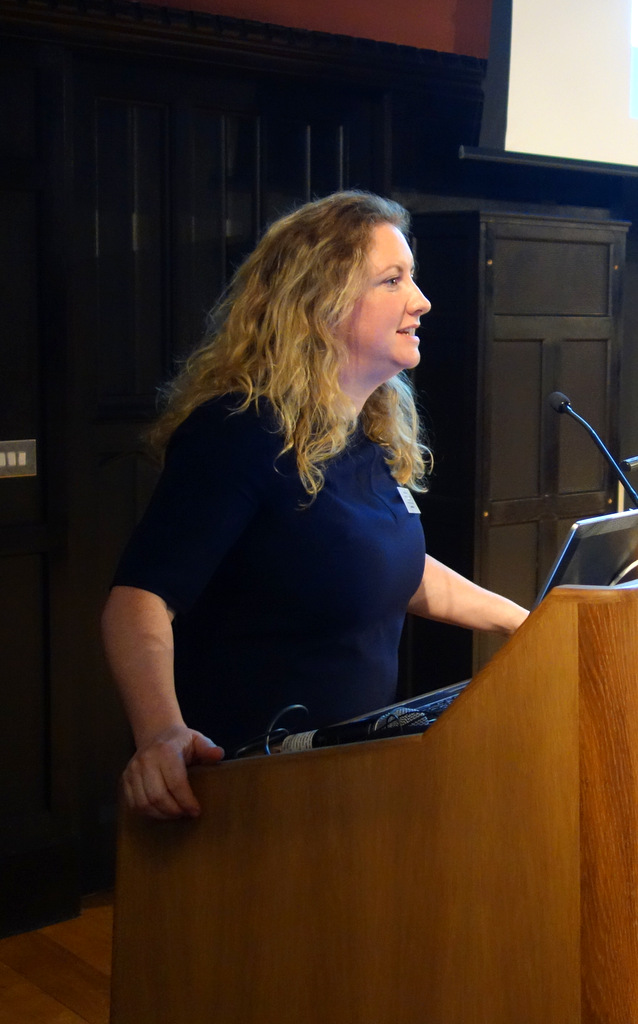 Interacting with people was a recurrent theme of the evening. Dr Dervila Glynn said that during the PhD and post-doc “I was working a lot with mice, I just wanted to see some people!” She therefore decided to become the coordinator of Cambridge Neuroscience, a strategic research initiative at the University of Cambridge involving more than 30 departments and 770 members. She now organises small and large events, “from picking the coffee cup to the plenary speaker”. Dr Glynn also helped establish CamBRAIN and external partnerships, is involved in public engagement, and meetings with policymakers. While bigger companies usually rely on different departments for communications or event planning, Dr Glynn is largely in charge of these activity herself. Although her days can be stressful, she likes that she can make a difference and meet interesting people.

The penultimate speaker was Dr Ben Bleasdale, who works as a policy officer for the Academy of Medical Sciences. He informs policymakers such as the government or EU about scientific research and how it affects society. His job involves background research on upcoming topics, preparing reports, and meetings with researchers, industry figures, and policymakers. He said “It’s cool to read about a hot topic in the media that you have worked on” and that he enjoys the variety of his days. Dr Bleasdale’s route into science policy was through an internship during his PhD, which he highly recommended. He was also involved in public engagement, such as science writing competitions and FameLab, which are valued experiences.

Dr Tristan Bekinschtein concluded the talks. He is a lecturer at the Department of Psychology at the University of Cambridge, who is very passionate about his research on consciousness. Although not all graduates decide to stay in academia, Dr Bekischstein thinks that a research career can be rewarding and stimulating. 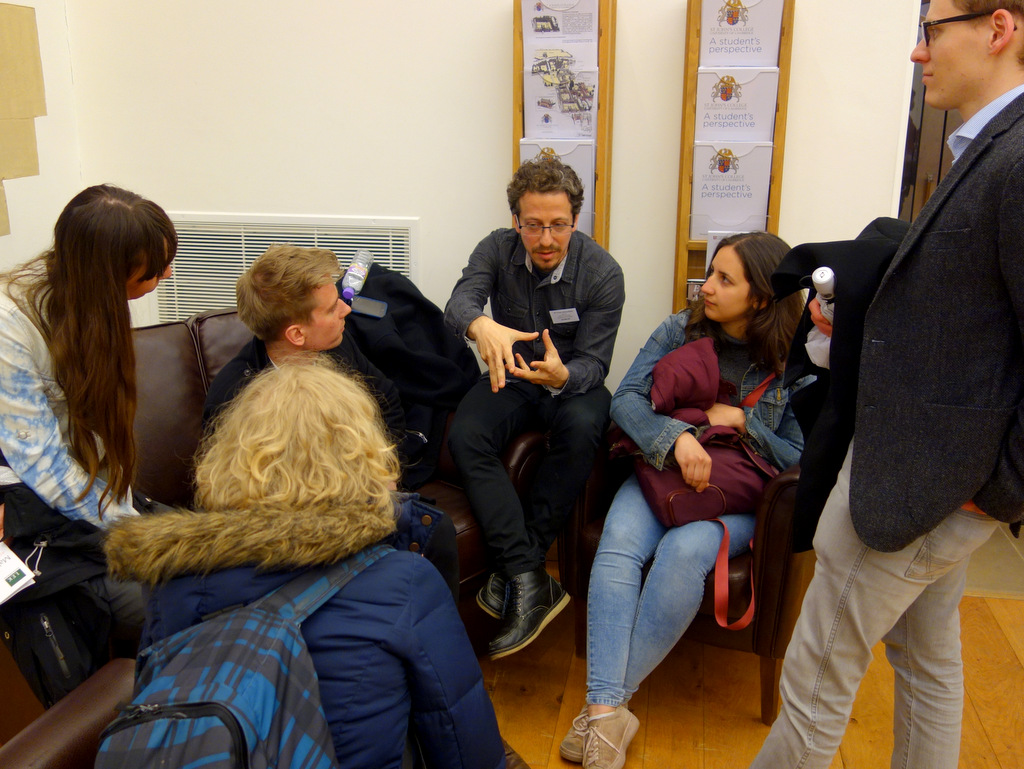 He talked about the difficulties of getting funding and the importance of “sending fearless emails to your funders”. He also recommended to get involved in public engagement and discussing your research with as many people as possible, because “you never know what spin-offs and new applications could come from it”.

The talks were followed by a speed-networking, for which speakers and delegates split up into 9 groups. Every 3 minutes, the groups rotated, giving the delegates a chance to talk to each of the experts and ask questions. The discussions were then continued during a drinks reception. CamBRAIN hopes that the attendees felt inspired to think about new careers. One delegate said: “I had no idea that there are so many different things I can do with my degree”.