Skin picking disorder (SPD), also known as excoriation, is a psychiatric condition which has received little attention from clinical researchers.  People with SPD cause damage to their skin by picking it but are unable to stop doing so.  It has been estimated that over 5% of people in some geographical regions suffer from SPD.  Currently, only four other placebo-controlled clinical trials on this condition appear in the literature.  These four trials have had mixed success with different drugs. 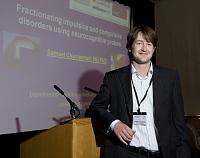 To address this gap in the literature, a new study has been published in collaboration between Cambridge and the University of Chicago, led by Professor Jon Grant at the University of Chicago.  This study looked at whether the drug N-acetylcysteine could help reduce symptoms in people with SPD.  N-acetylcysteine has previously been shown to be effective in trichotillomania, a closely-related condition in which patients pull out their hair.  Sixty-six participants were recruited and randomly assigned to experimental or control groups in a double-blind procedure.  They were each asked to take the drug (or placebo) every day for 12 weeks.  The severity of SPD was assessed before, during, and after the medication treatment using several different scales.  In addition, quality of life and a few cognitive measures were evaluated.  To analyse the data, researchers looked at whether the time on the medication and treatment type (placebo or N-Acetylcysteine) together could significantly predict improvements better than the treatment type or the time on medication could do alone.

They found that N-acetylcysteine was significantly correlated with improvements in most of the measures of SPD severity over time.  The observed side effects of N-acetylcysteine were minimal.  There was no significant change in quality of life on the medication.  Of the cognitive measures, only extradimensional set shifting, a measure of cognitive flexibility and executive function, was significantly lower in the N-acetylcysteine group, showing the drug did not greatly affect cognition.  These positive results seem to be driven by reducing the urge of the patients to pick their skin, which is consistent with previous research using N-acetylcysteine to reduce cocaine addiction.

“These findings are important because they show that skin picking is a treatable psychiatric condition, using a medication that is relatively inexpensive and has a good side effects profile” says Dr. Sam Chamberlain, a Clinical Lecturer at Cambridge and an author on the study.  “Future work will explore whether the medication helps over the longer term, and how it has its effects on the symptoms by acting on reward systems in the brain.“