The cerebral cortex consists of specific granular layers, each with unique biological characteristics. However, current Magnetic Resonance Imaging (MRI) techniques can’t sufficiently distinguish between these layers. A recent study published in Translational Psychiatry by Mr Konrad Wagstyl, Professor Paul Fletcher and others in the Department of Psychiatry successfully addressed these limitations. The authors used predictable morphological features of the cortical layers to distinguish between individuals with schizophrenia and healthy controls, using MRI. They were thus able to provide a way of identifying specific changes in particular layers of the cortex (layers I-III: supragranular and layers V-VI: infragranular) that would be expected in schizophrenia. 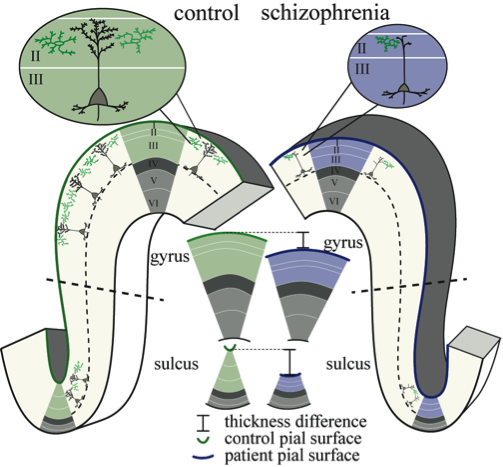 Schematic image of cortical shape changes expected and shown to occur in schizophrenia.

It is well-known that thinning of the supragranular layer occurs in schizophrenia. The present study aimed to demonstrate this using measures of cortical layer neurobiology. The authors identified four markers that are specific to changes in supragranular layers and tested for such differences in a sample of patients with schizophrenia and matched healthy controls. The four morphological markers are measurable changes that are expected to occur with supragranular thinning and were examined in patients with schizophrenia and healthy control volunteers. The measures included the intrinsic curvature of the cortex (how round or flat the surface folds are) and differences between gyral versus sulcal thinning (i.e. outer and inner folds of the cortex, see image).

Patients with schizophrenia showed expected changes in all four measures. This study thus provides a means of testing specific cortical layer changes, which has thus far not been possible using traditional MRI. Application of this technique to other psychiatric or neurological disorders might provide novel insight into disease pathogenesis and expression.

The lead author, Mr Wagstyl, a PhD student in the Department of Psychiatry,  commented:

“It is difficult to understand the neurobiological origin of subtle changes in brain shape that are noted across a wide range of neuropsychiatric conditions. In our study we show that, at least for subjects with schizophrenia, morphological differences can be directly linked to structural changes traditionally identified under the microscope. Our hope is that increasingly specific and informative biomarkers can be used to link cognitive and behavioural changes to their neurological cause.”