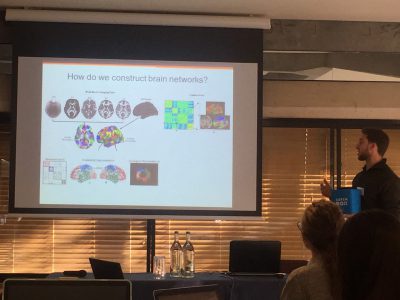 Last week saw a group of researchers from a wide range of academic backgrounds descend on a seminar room in the University Centre to take part in the Cambridge branch of this years Brainhack Global event. Brainhack is a unique event that brings together groups of researchers interested in neuroscience to facilitate them in working collaboratively on new and exciting projects. The event is a global phenomenon and simultaneously occurs at several locations around the world,including the USA, Brazil and Japan.

The programme boasted an exciting selection of talks, tutorials and panel discussions. The event also involved various spontaneous discussions as well as a focus on group-based collaborative projects. The emphasis of the event was on simply creating a space in which to facilitate collaborations and the exchange of knowledge between researchers. This gave the event a more flexible and less constricting format than typical conference events. 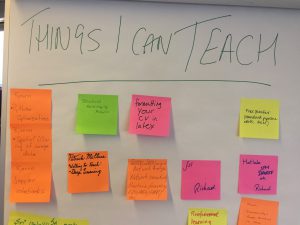 Some of the skills on offer

The first day kicked off with two PhD students from the Department of Psychiatry, František Váša and Jakob Seidlitz, presenting a talk that covered the fundamentals of network neuroscience and introduced some of the freely available datasets that researchers could utilize to carry out this type of research. Other excellent talks included Dr Darren Price‘s talk on the CamCAN managed access dataset, Dr Kirstie Whitaker on how to produce reproducible research and Dr Niko Kriegeskorte on how we can use deep neural networks to understand visual perception.

While many of these talks were followed by lively discussions, there were also a number of specific topics of interest that the Brainhack attendees discussed as a group.  Aki MacFarlane and Hannah Hope from the Wellcome Trust’s open research team chaired an exciting discussion on potential innovations and roadblocks for open research. The final day saw Dr Anne-Laura van Harmelen, Dr Rolf Ypma and Chung Yen Looi invited to attend as part of a panel discussion on careers for neuroscientists. 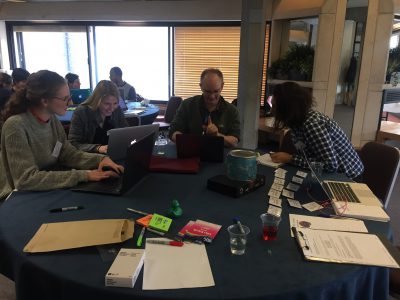 Attendees at this year’s event discuss their project

A key aspect of the event was bringing together researchers to share and exchange knowledge. Attendees were encouraged to share both the skills they felt they were able to teach but also things they would like to learn during the weekend. Dr Jan Freyberg gave an excellent hands-on tutorial on how to use Jupyter notebooks to combine live code with explanatory text in order to create interactive tutorials for others to learn from.

Before closing on the final day, the various different project groups from the event presented some of the work they had completed during the event. Richard Bethlehem, a PhD student from the Department of Psychiatry, led a team on a project that developed an approach to try to show how differences in cognitive processing can lead to differences in connectivity hierarchy using a freely available MRI database of autistic individuals. You can see the end results of their work on the project website.

The event was a huge success and was made possible by the kind support of various organisations. In particular, the organisers would like to thank The Wellcome Trust, PLOS, SPARC and Open Data Day, Overleaf, Mozilla Science Lab, MRC Cognition and Brain Sciences Unit and the University of Cambridge Department of Psychiatry.

If you want to follow the Brainhack global event and keep an eye out on for the 2018 event, you can find details of the organisation on their website.