Accurate evaluation of threats in our environment enables us to choose and perform adaptive behaviours. However, responding flexibly to threatening stimuli can be challenging for those with mental illness. The combination of rigid threat estimation characterises most major anxiety disorders, and these symptoms are also observed amongst individuals suffering with obsessive compulsive disorder (OCD) alongside rigid behavioural patterns. In OCD, frequent, intrusive thoughts (or ‘obsessions’) lead an individual to perform repetitive behaviours or mental acts to relieve distress associated with the thought (‘compulsions’). In addition to significant psychosocial distress, individuals with OCD may be at risk of physical harm, depending on the nature of their compulsions. 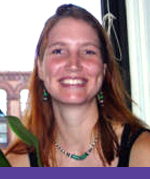 Behavioural therapies for anxiety-related disorders aim to minimise intrusive thoughts using ‘fear extinction,’ which requires patients to re-evaluate threatening stimuli as safe. This therapy is augmented for OCD to also reduce compulsions. For example, exposure response prevention (ERP), the standard psychotherapy for OCD, involves repeated exposures to fearful stimuli while preventing the patient from performing any compulsions. Unfortunately, many patients struggle to complete ERP, which has led some researchers to hypothesise a disruption of safety processing in OCD.

Researchers from the University of Cambridge sought to address this important clinical question by examining the neural correlates of safety processing in adults with OCD when compared to healthy controls. The team, led by Dr. Annemieke Apergis-Schoute from the Departments of Psychiatry and Psychology, used functional magnetic resonance imaging (fMRI) to examine blood flow in the brain as participants completed a fear reversal learning task.

During the task, participants viewed two faces, one ‘safe’ and one threatening. The participants were tasked to figure out which face was associated with a mild electric shock that was delivered to their wrist. However, the relationship between the faces and shocks reversed halfway through the task, requiring subjects to update learning of the safe and threatening stimuli (pictured below). In addition to fMRI, the researchers measured skin conductance responses throughout the task.

Findings from the study, published earlier this year in Proceedings of the National Academy of Sciences, showed impaired learning in OCD that was related to singular encoding of threatening stimuli and a failure to encode safe stimuli. Specifically, the OCD group showed increased activation of the ventromedial prefrontal cortex (vmPFC) relative to controls when viewing the threatening face versus the face not associated with a shock. Moreover, the increased vmPFC response to threat predicted a decrease in patients’ ability to learn the new safe face following reversal. Skin conductance responses in the OCD group further supported impaired differential learning after the task reversal. 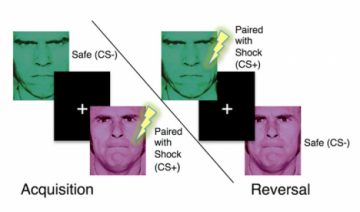 The authors suspect that failure to differentiate the updated threatening face from the updated safe face was related to how patients first encoded the face-shock pairings. Findings indicated that, in response to threat, activation of the vmPFC was correlated with activity in brain regions comprising the ‘salience network,’ which enables us to focus a ‘spotlight of attention’ on different stimuli in our environment. However, the relationship between vmPFC activity and the salience network was only observed when patients viewed the initial threatening face–never the safe one.

This was a stark contrast to the healthy control group, in which the vmPFC was most responsive to safe stimuli before and after reversal. The vmPFC integrates information conveying the value of a stimulus (in this case, a safe or threatening face) while also guiding flexible behavioural responding. Thus, failure to encode safe stimuli in the vmPFC may explain why patients with OCD struggle with current treatment options. As Dr. Apergis-Schoute suggests this work could inform future treatment: “I do think that by either specifically drawing attention to the safe feedback, or perhaps using a pharmacological manipulation to enhance the experience of positive safety feedback, [we] could help patients. Perhaps OCD patients pay too little attention to the outcome of not performing the compulsion – that it had no negative consequences and therefore was safe.”

The authors hope future research will continue to characterise the neurobiology of safety signalling in OCD, that will, in turn, aid development of novel therapies. In Dr. Apergis-Schoute’s own words, “It is always very difficult to translate research to clinical practice, but we should continue to try.”

Cover image: “day one.” by mitramirae licensed under CC BY 2.0