We would like to congratulate Dr. Sally Jennings who recently completed her PhD, which was supervised by Dr Howard Ring and Prof Tony Holland at the Cambridge Intellectual and Developmental Disabilities Research Group (CIDDRG). We caught up with Sally to ask her about her research into neural predictors of cognitive decline in Down’s Syndrome.

I have been working with adults with Down’s Syndrome. Down’s Syndrome is a genetic disorder associated with intellectual disability, accelerated aging and a propensity for early-onset Alzheimer’s disease. Alzheimer’s disease treatment trials are now moving towards administration of the intervention at preclinical stages, with the goal of preventing cognitive decline in the first place, rather than trying to halt or reverse existing pathology. Consequently, it has become essential to develop biomarkers of Alzheimer’s disease, which can predict clinical changes. Electroencephalography (EEG) is a non-invasive and inexpensive measure of cortical activity, which is being evaluated with the typically developing population as a potential biomarker of Alzheimer’s disease. My thesis aimed to evaluate EEG as a potential predictor of cognitive decline in Down’s Syndrome. 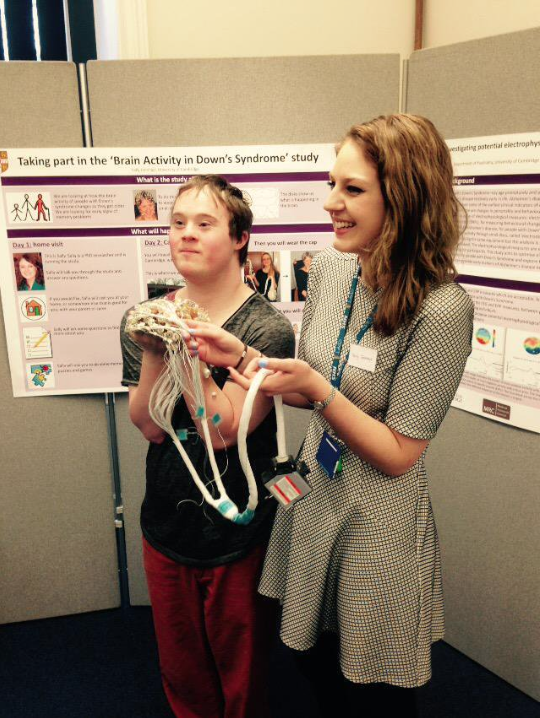 The thesis also included a longitudinal component in which 34 adults with Down’s Syndrome underwent a repeated cognitive examination one year after their EEG and initial cognitive assessment. The analyses found that adults with DS who had a smaller MMN at the initial assessment were more likely to decline at the cognitive follow-up. This finding suggests that MMN may be a potentially useful clinical tool for predicting cognitive decline.

When we set up the collaboration with the Clinical Neurosciences and Psychology departments. From these departments, Drs Tristan Bekinschtein, Srivas Chennu and Valdas Noreika taught me about EEG data collection and analysis. My home department had complimentary strengths from a clinical perspective. So the research was vastly improved by working together.

What was your worst day during your PhD?

It’s a cliché, but doing a PhD is very much a rollercoaster ride of emotions. I will say that maintaining a balance between home and work life has been essential. I was a founding member of CamBRAIN: The Cambridge Neuroscience Society, and having that alternative focus was essential for me to maintain the balance.

What I enjoyed most about my PhD was working collaboratively to produce a project with real-world applications. I’m not sure what I will do next, but I want to keep working with those principles in mind.

Cover image: “notebook” by waferboard licensed under CC BY 2.0