On 21 June the University of Cambridge presented its 2017 ‘Cambridge Green Challenge’ awards. The ceremony recognised the efforts of staff and students who had worked this year to improve the environmental performance of their places of work and study. Wolfson College’s Lee Hall provided a great venue for the 140 attendees from across the University while the College’s Betty Wu Lee Garden was an excellent space for the winners to bask in their achievements (and the hot June sun!) and share ideas for even more ‘green’ progress over drinks and canapés. 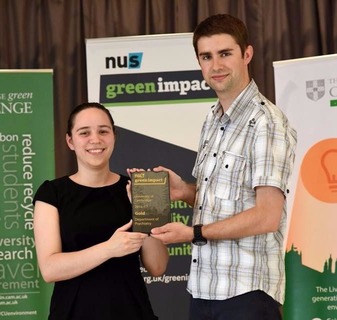 Participants in two competitions were recognised this year, Green Impact and the Carbon Challenge. The Green Impact awards were presented first. Green Impact is a national programme run by many organisations, and at Cambridge the programme recognises the efforts of University departments, labs and Colleges in improving their environmental performance. A total of 45 awards were presented, more than in any previous year, these awards included eight Green Impact Labs awards, seven Bronze awards, seven Silver awards, and 14 Gold awards. A new more challenging Platinum award was launched for the first time this year and was achieved by an impressive five teams, while four teams received an ‘Excellence’ award for their work carrying out larger sustainability-related projects of their own design. Five special certificates were also handed out to recognise individuals and groups that go beyond the requirements of Green Impact, including an individual staff ‘environmental hero’ and a ‘student leadership’ award.

The Carbon Challenge was a new competition launched at the beginning of the academic year and invited staff and students to form teams and develop innovative proposals to cut carbon emissions on the University estate. The proposals were presented to specialist judges from within the University, and a project plan and concepts drawn up. There were two finalists, and it was announced that both would receive funding for their proposal to be implemented on the University estate. The runner-up was ‘Team Solar Storage’; this team put forward a project which would use battery storage alongside solar panels at Laundry Farm (the location of the University’s fleet of electric vehicles). The winner, who received a special award made from locally from reclaimed wood, was ‘Team PlanIt Green’ with their plan to use hydroponics (a dense, soil-less plant growth system) to lower building energy use by reducing the energy required for ventilation and heating.

Congratulations to all Green Impact teams and Carbon Challengers. The future looks bright with so many enthusiastic, innovative people working together to improve the University’s environmental performance.

Written by: Grainne Kennedy
Reposted from http://www.environment.admin.cam.ac.uk/news/wolfson-green-clothing-award-winners-announced-ceremony with permission.