The Bedfordshire Center for Mental Health Research and the University of Cambridge (BCMHR-CU) hosted the 6th Cambridge International Conference on Mental Health on 20th-22nd September, attracting leading experts in the fields of psychiatry, philosophy and neuroscience. The biennial conference featured a variety of symposia, which discussed major advancements in the research and treatment of psychiatric conditions, as well as presentations by MD and PhD trainees from across Europe, New Zealand and India. 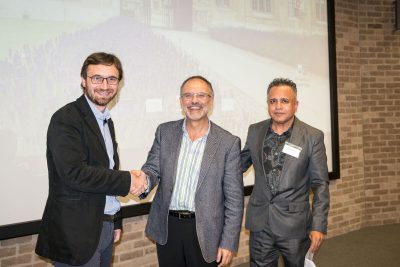 Professor Christos Pantelis of the University of Melbourne presented the prizes to Dr Muzaffer Kaser, NIHR Clinical Lecturer in General Adult Psychiatry at the Department of Psychiatry, and Anna McKeever, a fourth-year medical student at Cambridge. The conference organisers, Drs Mark Agius and Rashid Zaman, noted the stiff competition amongst trainees when congratulating Kaser and McKeever for their achievements.

Dr Kaser received the Best Trainee Presentation Prize for his novel work on the use of modafinil to address cognitive dysfunction in patients with remitted depression. While many patients with depression will benefit from existing treatments, difficulties related to concentration, memory and attention often persist into recovery. Keen to address this important clinical gap, Kaser led a randomised, double-blind, placebo-controlled study to examine the impact of modafinil on cognitive processes in patients with remitted depression. Results showed improvements in episodic and working memory following modafinil administration, suggesting that the drug may aid patients who suffer with unrelenting cognitive problems.

I am delighted to receive the best trainee presentation prize. The conference was a great opportunity for me to share my work with many colleagues from all around the world. It is great to see that my research was recognised. As an early career clinical researcher, such prizes are motivating to produce more quality work. Thanks to organisers and the judges for their appreciation.

Anna McKeever was also recognised for her work on dementia, which she completed under the supervision of Dr Li Su, an Alzheimer’s Research UK (ARUK) Senior Research Fellow in the Department of Psychiatry. Working in collaboration with the PREVENT Dementia team, McKeever sought to identify biomarkers of dementia risk in a sample of middle-aged adults. Her study aligned with the aims of the PREVENT Dementia project, which she said, “aims to identify the earliest signs of Alzheimer’s disease in asymptomatic adults, with the hope of facilitating earlier intervention and prevention in patients at high risk of developing dementia.” Specifically, McKeever investigated associations between functional and structural magnetic resonance imaging (MRI) data, cognitive performance and individual dementia risk. By examining multiple indices of dementia risk, she extended efforts to identify potential biomarkers of dementia (e.g., Alzheimer’s disease) well before the first symptoms appear.

In a statement to the News Team, Agius expressed his excitement about McKeever’s work, “the subject matter is of great significance in the development of treatments for Alzheimer’s disease, which is a growing challenge to mental health in elderly people.“

Zaman added, “We are very proud of the success of the conference (confirmed by large positive feedback). We believe this biennial conference not only brings some the world experts together in beautiful Cambridge but gives an opportunity to the psychiatry trainees, PhD students and medical students to present their work. We also believe this academic opportunity encourages medical students to consider psychiatry as future career.”

Congratulations to both Dr Kaser and Anna on their accomplishments!