Amnestic mild cognitive impairment (aMCI) is a condition in which a person has mild, but noticeable, decline in memory and cognitive abilities, such as problem solving or attention. Though symptoms are less severe than in Alzheimer’s disease (AD), people with aMCI have an increased risk of transitioning to AD. Consequently, aMCI often represents a precursor to dementia, providing a window of opportunity for early intervention.

Despite this, researchers have yet to find effective pharmaceutical treatments for aMCI. Instead, some interventions leverage computer-based training paradigms, which can improve the memory problems and cognitive competencies characteristic of this condition. Unfortunately, cognitive training programs are often subject to high dropout rates due to the motivational deficits associated with older populations with memory difficulties.

To improve the memory and motivation problems in people with aMCI, researchers from the Department of Psychiatry at the University of Cambridge developed a novel learning and memory iPad-based game called “Game Show.” The team went on to conduct a randomised controlled trial to test its effects. The study was led by Dr George Savulich, and the findings were published in the International Journal of Neuropsychopharmacology. 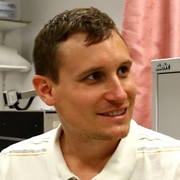 First author Dr George Savulich of the Dept of Psychiatry

In ‘Game Show’, players are challenged to associate different geometric patterns with different spatial locations, and they win coins upon giving the correct answer. Importantly, the level of difficulty (i.e., the number of geometric patterns that have to be identified) is adapted to the skill of the player, ensuring that participants stay motivated and engaged throughout gameplay. After each session with “Game Show”, participants rate their levels of enjoyment, confidence, and self-rated memory.

In the study, 42 patients with aMCI were randomised to either the cognitive training group, who received eight hours of supervised gameplay of Game Show over the course of four weeks, or the control group, who attended the clinic as usual but were not invited to play Game Show. Both groups also completed neuropsychological testing before and after the training period in order to assess different aspects of their memory.

Results from the trial demonstrated that the group of aMCI patients who played Game Show showed significant improvements in episodic memory (memory of locations and events) compared to the control group. Specifically, participants who played Game Show made fewer errors on and took fewer trials to complete a neuropsychological learning and memory assessment test. Moreover, self-confidence and self-reported memory improved over time in patients playing Game Show compared with patients who only attended the clinic as usual.

These findings highlight the benefits of ‘gamification’ of cognitive training in maximizing the participant’s engagement with the training, as Dr Savulich explains. He elaborates that an added benefit to the intervention is that, “it offers a more personalised approach and reduces the stigma associated with mental health treatments, particularly as games are popular with people of all ages”. Gamified cognitive training has shown benefits in other populations as well, such as improving episodic memory in individuals with schizophrenia. Indeed, Dr Savulich comments, “This study provides a good example of how technology can be utilised in mental health and should not preclude older populations”. In future research, the team would like to determine in a larger sample size whether the effects observed in this study persist in the longer-term.

Cover image ‘phone‘ by Tayloright licensed under CC BY 2.0.