We would like to congratulate Frantisek Vasa on completing his PhD!  Frantisek completed his PhD under the supervision of Dr Edward Bullmore.  Here, Frantisek gives us a quick summary of his work and findings. 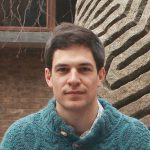 I have been studying human brain networks, representing relationships between regions of the brain, which can be constructed using magnetic resonance imaging (MRI).

The hope in my research area is that patterns of connections in such networks can be used to track changes in the brain related to development or disease. For example, many psychiatric disorders emerge during adolescence, presumably as a result of abnormal development.  However, even healthy maturation in this period is relatively poorly understood – hindering our ability to identify the emergence of disorders.

While there are clear motivations behind endeavours to map the connections in human brains, there are many unanswered questions regarding the construction of these networks and how they are analysed. Some of these issues arise from the fact that we are not able to “see” these connections directly, and instead must infer their presence by calculating statistical associations between the properties of pairs of regions. There are two popular ways of doing this.

Firstly, by measuring whether the activity of a pair of regions is similar over time – giving a “functional brain network” of synchronised brain activity of a single person. Alternatively, you can look at whether two regions that look similar in their structure in one person also look similar in other people – giving a “structural brain network” of similarity in brain structure of a group of people.

The most popular measure used to quantify these statistical associations is the correlation. I have been interested in the implications of constructing brain networks using correlations, and in the development and application of new methods to better understand how these networks change in disease and in adolescent development.

One step that is commonly applied during (brain) network analysis is the focus on only a subset of associations in the network – generally the strongest ones, while the weaker relationships are eliminated in a step is called “thresholding”.

For example, some past studies claiming to identify differences in brain network organisation between patients with schizophrenia and healthy participants were most likely driven by the method used to build the brain network, and by the fact that the likelihood of connections was not taken into account during the analysis.

This doesn’t mean that there aren’t any differences in brain network organisation between healthy controls and patients with schizophrenia – but the methods used to compare brain networks are key to identifying meaningful differences between them.

I have also applied a related idea to study changes in network organisation during adolescence, together with a new method to detect these changes. Previous approaches to study how brain networks develop allowed the extraction of infrequent “snapshots” of changes in network organisation as a function of age – only one such “snapshot” every few years, giving only a rough description of brain network maturation. I have developed a method that provides a more detailed representation of network change, leading to “snapshots” of network organisation on much shorter time-scales. Using this method, I have found changes in brain areas responsible for complex cognitive tasks between 14 and 24 years. This is consistent with the “pruning” of some connections during adolescence, together with consolidation of the connections that survive.

I have always been interested in science. I initially studied theoretical physics, which satisfied my curiosity but seemed too abstract. I then moved to biomedical engineering, where I hoped to apply my mathematical knowledge to help solve medical problems. That is where I found out about brain networks, a fascinating double cross-roads. Both neuroscience and network science lie at the intersection of multiple fields. In neuroscience, people from a variety of backgrounds use a range of different methods to study the brain; networks are one such method, but also a kind of universal language that can be used to study systems as diverse as social networks, transport networks or the internet. These ideas fascinated me, so doing a PhD was the perfect way to learn more about them and try to help to develop them further. More generally, I love learning – and during a PhD, you are paid to study and learn about a topic of your choice. How amazing is that?

I have most enjoyed attending conferences. I have been fortunate to experience both large international conferences attended by thousands of scientists with a range of interests, and small focused workshops where a single topic is explored in depth.

The best day was when I gave my first talk at a large international conference, in front of several hundred people. It was a wonderful experience – despite the fire alarm going off in the middle of my talk! Perhaps ironically, it actually helped me. I was a bit nervous during the first half of my talk. The fire alarm going off was surprising, but also funny – and reminded me not to take myself and my presentation too seriously. After a minute of slow evacuation, the alarm stopped and people returned to their seats. As I resumed my talk, I managed to joke about the alarm going off, and then felt much more relaxed during the second half of my talk. It certainly made my first talk a much more memorable experience.

I didn’t have a single worst day, but one of the more frustrating experiences involved finding out that data that I have been analysing for over a year might have been corrupted by movement of our subjects in the magnetic resonance scanner. We try to take precautions to ensure that the data does not contain artefacts, due to unwanted effects such as participant in-scanner motion, but such confounding factors are very hard to completely rule out. The fear of having spent months working on potentially meaningless data, together with the frustration of reprocessing the data and rerunning analyses, was unpleasant – particularly because one such episode occurred after I already began to write up my PhD thesis. Fortunately, having friendly lab-mates to help assess and correct such issues, and computer code to re-run analyses on the clean data, helped me to overcome these challenges.

I am enjoying research on the human brain, so would like to keep going. Ideally, I hope to move (even) closer to potentially practical applications of network neuroimaging. At the same time, I want to continue to deepen my knowledge of the relevant methods – especially statistics, which is an invaluable tool in this field. This would also be my advice to anyone considering neuroscience-related research: equip yourself with as much statistics and programming experience as possible – these will stand you in good stead, no matter the specific questions that you will work on.