We would like to congratulate Joost Haarsma on completing his PhD!  Joost completed his PhD under the supervision of Dr Graham Murray and Prof Paul Fletcher, and worked with the developmental psychiatry research group headed by Prof Ian Goodyer. Here, Joost gives us a quick summary of his work and findings. 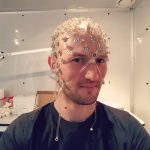 My research was aimed at trying to understand the mechanisms that underlie psychotic symptoms. These include experiences that could be described as a loss of contact with reality, such as the formation of delusional beliefs and the emergence of hallucinatory experiences. The underlying principle in my research is that we should aim to embed our understanding of these anomalous experiences in a framework that describes normal belief formation and perception. That is, if we understand the mechanisms that underlie the formation of normal beliefs and how we come to perceive the world that we find ourselves in, we should by tweaking some of the parameters start to see how these anomalous experiences come about.

The core of my PhD research has involved recruiting young adolescents who either were at risk for developing a psychosis, because they were experiencing sub-clinical psychotic experiences, and individuals who in recent years experienced their first episode of psychosis. These individuals kindly agreed to undergo a series of cognitive tasks in addition to a neuroimaging paradigm, all of which tailored to understand the mechanisms by which they form beliefs and perceive the natural world. More precisely, as recent mechanistic models of the mind have put an emphasis on how our prior expectations shape how we perceive the world, most of my research is targeted at exploring how this is altered in individuals in the early stages of psychosis.

Learning is driven by neural signals that describe the difference between what someone expected to happen on the basis of prior experiences, and what actually happened. These signals subsequently change your prior expectations, so it is closer to reality next time around. In other words, these prediction errors are crucial in shaping our beliefs about the world. Crucially, these prediction errors should take into account when information is reliable or unreliable, such that learning ensues in the former but not in the latter case. When the brains fails to accommodate for the reliability of these signals, we can expect maladaptive learning to occur, as we might see when delusional beliefs are formed.

My research showed that these prediction error signals in the brain are indeed taking into account the reliability of information during learning. They achieve this by scaling them in such a way that they elicit a stronger response when information is reliable compared to when it is unreliable. Second I showed that dopamine plays a role in the scaling of prediction errors, such that when I block dopamine receptors using a drug, the scaling of prediction errors disappears. This is interesting, as dopamine has been suggested to play an important role in psychotic symptoms. Could it be that psychosis is characterized by a failure to appropriately take into account the reliability of information when coding these neural signals? This indeed seems to be the case in individuals who recently experienced their first episode of psychosis, suggesting that the reason why these individuals form delusional beliefs might have to do with their inability to accommodate for the reliability of new information when forming new beliefs.

My passion for science really started developing at the age of 19 when I read the Selfish Gene by Richard Dawkins. I vividly remember going out in the garden and appreciating the various bees collecting their nectar in a newfound way. I was struck by the ability of such a simple theory, which is the theory of evolution by natural selection, to explain the complexity of the world we find ourselves in. Some months later I started my undergraduate studies in Psychology, keen to learn about the mechanisms that allow us to perceive this world. It was during my internship in Cambridge, 4.5 years later, that I had an experience that echoed the one I had years before in the garden of my parents. It was in Cambridge where I learned about computational theories that had the ambition to describe the whole of brain functioning in just a few simple principles. Suddenly I felt that things were falling into place, and different strands of cognitive science could be brought together under the single umbrella of what is commonly known as hierarchical predictive coding. Admittedly, these theories are still in their infancy, and much needs to be done in refining these ideas. Nonetheless, it was this second experience that created the enthusiasm for me to pursue a PhD in cognitive neuroscience where I would use these ideas in trying to understand the formation of unusual models of the world as seen in psychosis.

I find it difficult to remember a single best day during my PhD. I have found great joy in the numerous conferences that I have been lucky enough to attend. Especially the conferences that had a more specific focus and where somewhat smaller in scale were incredibly enjoyable, as they allowed me to interact with like-minded young researchers and meet the leading scientists in the field. I especially have fond memories of the computational psychiatry conference in Zurich, the brain prize meeting in Middelfart, and the schizophrenia research conference in Florence.

In addition, it has been quite important for me to be involved in activities that had little to do with my PhD. For the duration of 1.5 years I have been involved in the committee of the Mindfulness Society, which allowed me to meet an incredible number of fascinating people. Being able to provide a mindfulness platform for the students of the university has given me a tremendous amount of satisfaction.

As there was no single best day, there was neither a single worst day. PhD-life can often be rather frustrating at times. The biggest stressors during my PhD included the recruitment and testing of the large numbers of volunteers. Furthermore, finding out that a certain experiment did not work out as expected, or realizing that a finding has been based on faulty analyses can also be an uncomfortable experience. However, I have had the incredible fortune to be surrounded by supervisors and colleagues who have been extraordinarily kind and supportive towards me, and have provided me with the perfect example of how to treat my own students if I ever came to supervise some.

Currently I am aiming to stay in academia to continue my research in understanding the mechanisms underlying mental illness. If all goes well I hope to someday start my own lab back in the Netherlands. If all fails, I will probably start a life as a diving instructor somewhere in Indonesia. Either is fine with me!