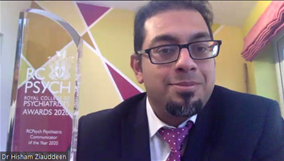 We congratulate Dr. Hisham Ziauddeen for being named the Psychiatric Communicator of the Year (2020) from the Royal College of Psychiatrists. Hisham is a Clinical Research Associate at the Department of Psychiatry, working on understanding the brain systems involved in disordered eating and psychosis. Hisham tells us more about the importance of communication in science and some of the challenges in integrating lived-experiences to scientific study designs.

1. Can you tell us what your research is on?
The term that comes to mind most when I think about my research is ‘unfocused’. The first major mistake of my research career was to get involved in too many different areas of research too early in my career. The second major mistake was to make little attempt to correct the first mistake and therefore still have no ready answer to this question. My current research, all of it led by brilliant PhD students, looks at the mechanisms of disordered eating in eating disorders (led by Dr Margaret Westwater), psychosis in borderline personality (led by Mx Charley Peitzmeier, PhD student) and interoception in psychosis (led by Ms Farah Hina, PhD student).
2. You were recently named the Psychiatric Communicator of the Year from the Royal College of Psychiatrists. What is this award about?
This is annual award bestowed by the Royal College to individuals who have demonstrated creativity and (at least some degree of) success in communicating aspects of psychiatry and its related sciences to different audiences. I think the Conversations programme (I’ll say more about this below) was a big factor in my nomination and having done bits of scicomm through stand up comedy, festivals and Twitter helped.
3. What drew you to science communication?
Deep down I suspect it is the unrelenting rankling feeling that simply not enough people are asking for my opinion on matters and that I can’t keep waiting around for them to ask me.
Apart from that, it is something that I think is very important and as it seemed to be something I have a bit of a knack for, I got into it and thoroughly enjoyed it. Interestingly, I have done a fair bit of scicomm in the background with COVID-19, which has brought into sharp relief many of the problems we have with the conduct and communication of science, and it has been challenging to think of how to communicate information clearly and precisely at a time when the consequences are so important and immediate.
4. Science communication is complex. What are, in your opinion, some of the challenges of effectively communicating research today?
I think science communication is subject to the same forces that hamper and distort information communication throughout our media and political systems: simplification, sensationalisation, decontextualisation, removal of nuance and uncertainty and forced reassurance/optimism. There is a communication formula that essentially states you should have a simple clear point(s), open with something attention grabbing, stay in the immediate realm of what you are discussing and end with some sort of a positive message. All of these are employed ostensibly based on a belief/narrative about what the public (the consumers of information) want and more importantly, can comprehend, which far too often leads to communicating a message, rather than communicating information. To me the challenge is resisting these forces to communicate complex information with uncertainty, nuance and context to inform and educate. Think more in terms of improving as a communicator rather than the perceived limitations of your potential audience.
5. Increasingly, a lot of researchers are using platforms such as Facebook and Twitter to communicate science. These platforms are very different from the typical platforms used to communicate science. What are your thoughts on the use of social media to communicate science.
These platforms are excellent and depending on how you use them, they can allow you to do really good science communication and deliver information in multiple levels of detail- a headline or short summary for everyone, more details for the more interested, in depth exploration and references for the seriously interested. You do need to mindful about how these platforms operate and women and individuals from minority groups are disproportionately targeted in these arenas.
6. You organize a very popular series of talks where people with mental health conditions shared their lived experience. Can you tell us a bit more about this, and why you think it’s important for researchers to regularly hear from people with mental health conditions?
So this is the Conversations with Experts by Experience programme, where we have people with lived experience of psychiatric illnesses (our teachers) talking to researchers interested in mental illness about the complex realities of mental illnesses and the huge variability in how these illnesses manifest and affect people. We started this so that researchers could get this important perspective on the reality of the conditions they study. This seems like a good thing in principle and our experience running the programme for the last 5 years has certainly confirmed this. Any time you take a complex condition into the lab, you will lose parts of it as you try and make it tractable to study. It’s important to know and remember what the reality of the condition is like and be aware of the bits you have lost in bringing it into the lab. This is all the more important when you deal with complex phenomena that are part of people’s inner worlds
7. Not all communication is about science. You regularly perform stand-up comedy. Can you tell us a bit more about it, and has stand-up influenced the way you communicate science?”
Stand up is a hobby and it is a great way of inviting/forcing people into your inner world, which can be awkward to do in regular conversation, certainly more than once.
Unlike science communication, stand up is performance. There is a lot that you can learn from performance that will help you become a better communicator and this has certainly helped me, and performance can help you get your message and information across more effectively. More often than not though, the  main influence of stand up on my science communication is the often uncontrollable urge to fit a joke into any possible opening in the conversation, with at best mixed results.