Replacing Dr Li Su from the University of Cambridge (UoC) Department of Psychiatry as network coordinator, UoC assistant professor Dr Ben Underwood is a familiar figure in the field of dementia research. He has been a consultant old age psychiatrist for ten years, running dementia research studies and trials with CPFT’s specialist Windsor Research Unit as clinical director.

He is currently the clinical lead for dementia in the East of England for the National Institute for Health Research Clinical Research Network (NIHR CRN Eastern) and national lead for stratified medicine in dementia. He joined the Department of Psychiatry as university lecturer in April 2021 and is the clinical director for the Gnodde Goldman Sachs Translational Neuroscience Unit in partnership with CPFT, which connects people living with dementia to the latest research, through experimental medicine and clinical trials.

Ben said: “I am very excited to join the East Network Centre.
During my term I hope to connect everyone working in the field of dementia research in the eastern region, and to build bridges between the regional networks. Connecting researchers is a sure-fire way of generating new ideas and projects which will ultimately bring benefit to patients.” 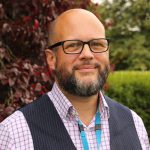 ARUK set up their Research Network in 1998 to support biomedical dementia research through the funding of collaborative science and networking to share findings and resources. The Network not only serves to bring researchers into the dementia field but also to disseminate research findings to the local community through annual public meetings.

The Network is open to all biomedical dementia researchers – from PhD students to tenured academics, basic scientists to clinicians. Find out more and join the East Network Centre.