Based on more than 120,000 brain scans, the charts are still preliminary. But researchers hope they could one day be used as a routine clinical tool by physicians.

Richard Bethlehem and Jakob Seidlitz amassed more than 120,000 brain scans — the largest collection of its kind — to create the first comprehensive growth charts for brain development.

The charts show visually how human brains expand quickly early in life and then shrink slowly with age.

The sheer magnitude of the study, published in Nature, has stunned neuroscientists, in part because of small sample sizes. Magnetic resonance imaging (MRI) is expensive, meaning that scientists are often limited in the number of participants they can enrol in experiments.

“The massive data set they assembled is extremely impressive and really sets a new standard for the field,” says Angela Laird, a cognitive neuroscientist at Florida International University in Miami.

Even so, the authors caution that their database isn’t completely inclusive — they struggled to gather brain scans from all regions of the globe. The resulting charts, they say, are therefore just a first draft, and further tweaks would be needed to deploy them in clinical settings.

If the charts are eventually rolled out to paediatricians, great care will be needed to ensure that they are not misinterpreted, says Hannah Tully, a paediatric neurologist at the University of Washington in Seattle. “A big brain is not necessarily a well-functioning brain,” she says.

Because brain structure varies significantly from person to person, the researchers had to aggregate a huge number of scans to create an authoritative set of growth charts with statistical significance.

That’s no easy task, says Richard Bethlehem, a neuroscientist at the University of Cambridge, UK, and a co-author of the study.

Instead of running thousands of scans themselves, which would take decades and be prohibitively costly, the researchers turned to already-completed neuroimaging studies.

Bethlehem and Seidlitz sent e-mails to researchers all over the world asking if they would share their neuroimaging data for the project.

The duo was amazed by the number of replies, which they attribute to the COVID-19 pandemic giving researchers less time in their laboratories and more time than usual with their e-mail inboxes.

The scans included brains from neurotypical people, as well as people with a variety of medical conditions, such as Alzheimer’s disease, and neurocognitive differences, including autism spectrum disorder.

The researchers used statistical models to extract information from the images, and ensure that the scans were directly comparable, no matter what type of MRI machine had been used. 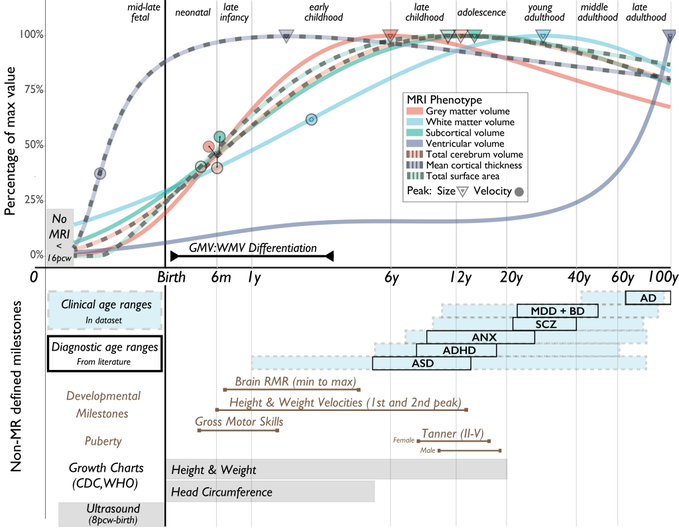 A graphical summary of the normative trajectories of the median (50th centile) for each global MRI phenotype, and key developmental milestones, as a function of age (log-scaled). 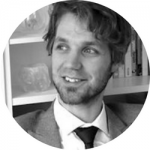 Richard is currently a Research Associate at the Brain Mapping Unit and Director of Neuroimaging at the Autism Research Centre, both in the Department of Psychiatry at the University of Cambridge.

His research aims at gaining a better understanding of the genetic underpinnings of typical and atypical neurodevelopment by integrating cutting-edge neuroimaging and transcriptomics techniques. Increasingly, this involves the use of large neuroimaging and genetic datasets such as the UK BioBank and ABCD cohorts as well as machine learning methods to delineate highly complex data. In Cambridge, he maintains close collaboration with Professores Bullmore and Baron-Cohen as well as with Professor Pietro Lio at the Computer Sciences department at Cambridge, the Geschwind and Gandal labs at UCLA, the Multimodal Imaging and Connectome Analysis lab at the MNI led by Dr Boris Bernhardt, the Brain-Gene-Development lab at the CHOP Research Institute led by Dr Aaron Alexander-Bloch as well as with The University of York through his collaboration with Professor Beth Jefferies.

Keep up with Richard and this project on Twitter @rai_bethlehem

This post summarises Max Kozlov’s Your brain expands and shrinks over time — these charts show how published online by Nature.
The open-access article Brain Charts for the Human Lifespan by Richard Bethlehem and Jakob Siedlitz  is available here: https://doi.org/10.1038/d41586-022-00971-1
The cover image for this post is credited to Zephyr/SPL.