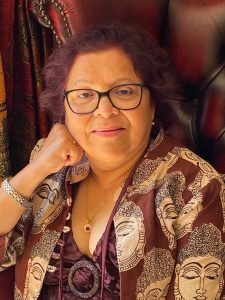 Her work focuses on how these mechanisms could accelerate in the ageing brain and during neurodegeneration. Inflammation and innate immunity are key players in Alzheimer’s disease (AD) and Down syndrome (DS) dementia. My group identified critical factors that link amyloid (Aβ) deposition that leads to neurodegeneration in DS. Large numbers of genes/proteins were identified in serum (by MASS spectra) in our DS cohort, leading to investigating the function of these anti-inflammatory genes, TREM2 (triggering receptor expressed on myeloid cells), hepcidin and CD26 in DS and AD. She has reported the crucial role of TREM2 in brain neuroprotection and plasticity. TREM2 mutations were identified in two DS subjects who had severe dementia and neuroinflammation (Raha et al., 2017; Raha-Chowdhury et al, 2018, 2019).

Individuals with DS have a spectrum of hematopoietic dysfunctions, and by the age of  40 years, almost all develop AD neuropathology. Hepcidin is a key regulator of brain iron homeostasis and bone morphogenesis influencing neurogenesis and astro-gliogenesis (Raha-Chowdhury et al, 2021; Raha et al, 2021).

Ruma’s work is crucial to better understand the underlying causative mechanisms in DS leading to AD-pathology and in identifying early blood markers that can aid in the evaluation of any putative preventative treatments. Her current project aims to understand how peripheral immune cells communicate with the central nervous system and influenced by the gut-brain-immune axis (Raha et al, 2020). Hopefully this will lead to novel therapeutic strategies to delay the ageing process in neurodegenerative diseases including in DS dementia.