Maddie has previously worked on the mitochondria function in Down’s syndrome study before starting her own PhD and project, retinal changes in people with Down’s syndrome.

The retinal changes study uses optical coherence tomography (OCT) to measure cell layers at the back of the eye. Because of the transparency of the eye we are able to take high-resolution images completely non-invasively. The OCT technology that we use is very similar to what is used by opticians, and having your eyes scanned by it is a lot like going for an eye test for new glasses. People are asked to sit as still as possible and look at a flashing blue light while the OCT machine takes hundreds of photographs of the eyes and builds them up into a 3D image like this one.

For the next stage of this study Maddie will be re-testing some of her volunteers one year later to see if there have been any changes in the structure of the retina over that time. 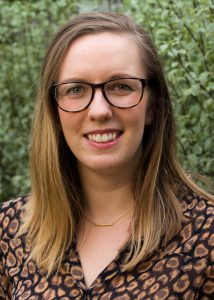